The big question before the second workout was: Will it be George Russell, which v Mercedes due to Covid-19 infection replaces the current world champion again before Valtteri Bottas? The twenty-two-year-old Briton, who in Williams we usually find it much more towards the end of the table, it was the fastest already in FP1, while he was then Bottas Fourth.

In the second practice, the asphalt cooled for four degrees Celsius at 26 degrees when he was the first to drive on the track Pietro Fittipaldi. Brazilian at Haasu replaces Romaina Grosjeanabecause the Geneva man burned his hands in a fireball at the Bahrain Grand Prix. With a time of 56,949, he set the first benchmark for rivals by a veteran Kimi Räikkönen in the Alfa Romeo quickly improved.

He was in first place for a while Carlos Sainz, but overtook the Spaniard Esteban Ocon, and the first quarter of an hour of training is with a loss of control over his Ferrari seasoned Sebastian Vettel, who was able to continue along the track. A similar thing happened to a teammate Leclerc, who drove hard from eighth bend and had to go to the pits for inspection.

Ten minutes later he did Hag spun again, this time in bend no. 5, being quite lucky not to have pulled anyone else with him. He was the closest to him Magnussen. He had the fastest time in the middle of training Sergio Perez, and soon overtook him Bottas, which, however, due to driving outside the delineated boundaries of the track in bend no. 8, the fastest time 54,506 in the end deleted. In the meantime Russell drove away 54,713 and took the lead.

We also heard bad news from the camp Charles Leclerc, where they had problems with his drive unit Ferrari SF1000. At first, they tried to fix the matter, but it soon became clear that they would not succeed by the end of training.

Verstappen is like Bottas made a mistake at the end of the eighth turn and complained on the radio: "The car is really understeering." His teammate had the same problems Alex Albon. It was even worse for Landa Norrisa, who first damaged the plate at the bottom of the car so they had to replace it, but after a long wait he had to go straight back to the pits because a new problem arose. The driver McLarna he no longer left the pits.

At the end of training we saw mostly longrune, so there were no major shifts in the scale. Russell he was able to look forward to two of the fastest times today, finishing in second place Verstappen, which was 128 thousandths of a second behind the British. Bottas he finished only in eleventh place, and even more painful was the end of training for the ninth Gasly, which he he threw a pebble into his finger, which, of course, was anything but pleasant for the end of the working day. 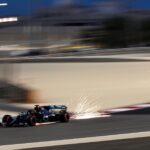 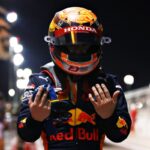