But responsible Formula 1 these rumors are categorical refused and claim they are not preparing no secret plan to vaccinate all members of the caravan of the royal class of motorsport.

Because it is published calendar racing season 2021 already endangered due to reports that there will be / are races in Melbourne in Shanghai and the other moved, is a Swiss newspaper View stated that formula 1 prepares an expansion plan Covida-19 protocol, which is now supposed to contain as well vaccination. "I can confirm that the media report is not true and that the FIA ​​and Formula 1 do not have such a plan,”Is for German television n-tv said a spokesman for Formula 1.

Besides already mentioned venues is at the beginning of the season 2021 another race is at stake and that is GP Monaco in Monte Carlo, where the event without viewers it is not feasible. But even bigger questions hang on whether teams can get out Great Britain they travel at all during the outbreak supposedly more dangerous strain of Covida-19. 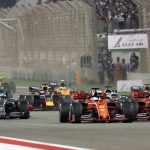