Back Next
Photo: HB Press

The decision fell. Winter testing before the season 2021 will not take place in Barcelona, as originally planned, but in Bahrain, where the inaugural race will also take place. February Formula 1 in ten teams they agreed that this was the most sensible solution, especially given the fact that the first part of the calendar had been changed.

Test and race in the same venue makes more sense than testing in Catalonia and the first race on the Arabian Peninsula. As it is known, this year's tests will last only three days, ie a day and a half for an individual racer. In favor of the Bahrain he also speaks more friendly weather and the fact that the situation with coronavirus in Bahrain less dramatic than in Spain. The downside, though, is that Bahrain located six hours a year from the team factories, making it more complicated to bring new parts to the racetrack. At the same time, it also poses justified question, why winter testing is not conducted a week before the racing weekend. The answer is because it is prescribed by the rules that it must pass between the end of the test and the first event at least 10 days.

Teams will be both for making race cars of the season 2021 had a little more time. According to the original plan, ie the test in Barcelona between 2 and 4 March, should send their race cars in the direction of Spain February 28th. Now all the air transport material will roam in Bahrain on March 4 or 5. The rule that one team can do the so-called recording day, but remains and the team can only choose a place for this purpose. Recording day is often used to check the functionality of a race car. Latest winter testing in Bahrain years have passed 2014, just before the first season of the new hybrid race cars. However, there was a test in the program earlier Jerez. 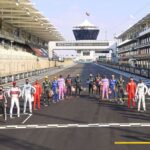